The Embassy of Argentina in New Zealand

1820 – 2020: BICENTENNIAL OF THE FIRST RAISING OF THE ARGENTINE FLAG IN THE MALVINAS ISLANDS 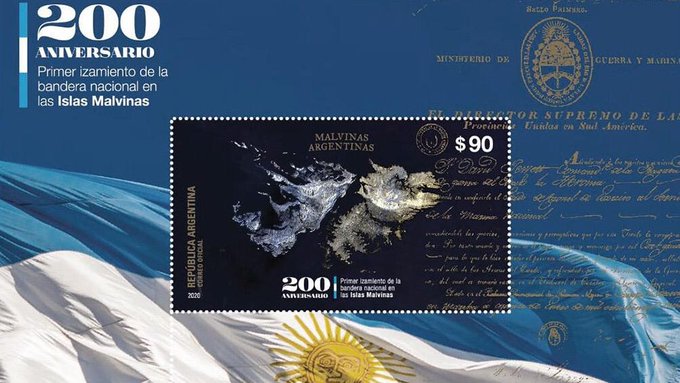 November 6 2020 marks the two-hundred-year anniversary of the first raising of the Argentine flag in the Malvinas Islands.

Since the very beginning of its existence as an independent nation in 1810, Argentina continued to exercise its jurisdiction over the vast territory that until then had been administered by Spain, including the Malvinas Islands, enacting legislation, legal and administrative structures, promoting the development of commercial activities, regulating the exploitation of resources, land distribution and the settlement of population.

With that purpose, on November 6 1820, the Argentine Navy Colonel David Jewett took solemn possession of the Malvinas Islands in the name of the United Provinces of the River Plate. In a public ceremony in front of the captains and crews of the vessels from many countries anchored at Puerto Soledad, Colonel Jewett raised the Argentine flag, fired 21 cannon shots and read a proclamation, making it known that, among other things, the authorities of Buenos Aires had decided to put an end to the unrestricted hunting of marine mammals.

This effective exercise of sovereignty was interrupted on January 3rd 1833, when the United Kingdom usurped the Islands, expelling the legitimate Argentine authorities and the population that had settled there, disrupting our country’s territorial integrity. This act of force was immediately and permanently protested, and has never been consented by any Argentine government. Since then –and until the present day- the Islands are the subject of a sovereignty dispute with the United Kingdom, recognized by the United Nations through Resolution 2065 (XX) of the General Assembly.

In compliance with that resolution, starting in 1966 and for 16 years, both countries held negotiations to find a solution to the sovereignty dispute. In spite of the countless invitations made by Argentina, and the exhortation of the United Nations, the United Kingdom continues to systematically refuses to resume negotiations over the sovereignty of the Islands.

The need for the quick resumption of bilateral negotiations has been reiterated by 10 United Nations General Assembly resolutions, by 38 resolutions of the United Nations’ Special Committee on Decolonization, and by the international community through several declarations of multilateral fora, such as the Organization of American States (OAS), the Group of 77 and China, the Iberoamerican Summits, the Community of Latin American and Caribbean States, MERCOSUR, the MERCOSUR Parliament, the South America – Africa Summits and South America – Arab Countries Summits.

Recovering the full exercise of our sovereignty over the Malvinas Islands, South Georgias, South Sandwich Islands and the surrounding maritime areas, with full respect of the lifestyle of the inhabitants and in accordance with international law, is a permanent and non-renounceable goal of the Argentine people, as established in the First Transitory Clause of the Argentine Constitution.

The Argentine Republic reaffirms once more its sovereignty rights over the Malvinas Islands, South Georgias Islands and South Sandwich Islands and the surrounding maritime areas, as well as its firm willingness to resume, as soon as possible, the negotiations over sovereignty with the United Kingdom in order to find a definitive solution to this anachro.